News to Us: NYC’s Wackiest Reporters 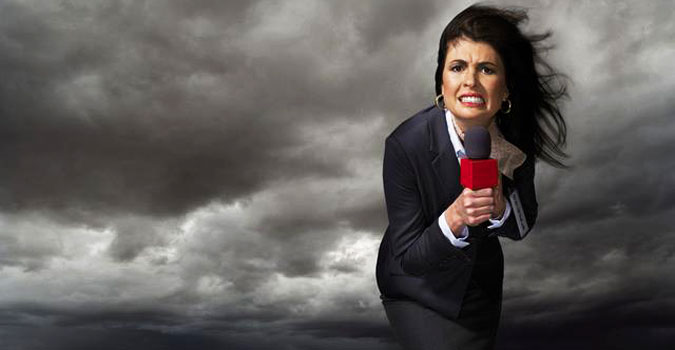 Lady Liberty may beckon, “Give me your tired, your poor, your huddled masses yearning to breathe free,” but it’s the dare-devils, the ‘80s enthusiasts, and the Vajazzled yearning to see airtime who have heeded the call, bringing with them enough material to fill up an eternity’s worth of nightly newscasts and front-page stories. Walter Cronkite once said of his chosen profession, “Our job is only to hold up the mirror – to tell and show the public what has happened.” Luckily for those of us in New York, the mirror is that of the funhouse variety and those who choose to stand in front of it are often circus-worthy themselves.

New York’s standards of beauty are different than anywhere else in the world, a fact that Good Day New York reporter Ernabel Demillo had to learn the hard way. When it comes to the real business of beauty in New York, it’s what’s going on underneath the outfit that counts. Demillo was tasked with finding out just what that is for some very open ladies at Completely Bare Salon, owned by Cindy Barshop, the latest addition to “The Real Housewives of New York” cast. But Barshop wasn’t there to talk about her future castmates; she was strictly lady-business, talking the ins and outs of decorating downstairs. According to Demillo, who kept her cool and very carefully averted her eyes throughout the segment, it was hardly her most uncomfortable on-air experience. “I found myself in was doing a live shot at the Trapeze School in Tribeca,” says Demillo. “I froze on the air. I was holding on to the trapeze and I was afraid to jump on live TV. Back at the station, there was a group of school children in the studio for another segment that started yelling “Jump, Jump, Jump ….” Viewers said they were late going to work waiting for me to jump. The producers even brought in our medical doctor, Dr. Steve Salvatore to comment on my fear of heights! Finally at 8:50, I knew it was my last chance to save my dignity. I let go and flew through the air and everyone started cheering — the live crowd and all my co-workers back the station. To this day, I still get fans coming up to me saying that I made them late for work that morning! I’m just glad this was all before YouTube.”

For those of you who think Pat Kiernan’s only job is to be the cutest deadpan Canadian this side of Dave Foley, think again. He’s also that guy who’s going to goad you into singing “Never Gonna Give You Up” on air. The former “World Series of Pop Culture” host, whose secret dream is “to do ‘Jeopardy’ when Alex [Trebek] retires],’ not only reads all the morning papers so his viewers don’t have to, but is willing to talk about issues no other newsman will touch. Like man cleavage. And how to uncork a bottle of wine with a shoe. Oh, Pat, you had us at Rick Astley.

Some people like getting their news from the guy with the hardest-hitting story. Some people like getting their news from the most serious guy in the room. And others, namely those of us who turn to NY1 for our local news, like getting it from a guy who’s willing to perform The Outfield’s “Your Love” mid-broadcast. Roger Clark, a general assignment reporter for the 24-hour news network, reports from all five boroughs with a style that’s distinctly his own, whether it’s tackling the trapeze in Brooklyn or practicing his pop-and-lock with some kids in Queens. “I feel like with all the bad news out there, viewers want a little fun in the morning,”Clark says of his willingness to sing for his supper, “So if I have to spin on the gym floor at the YMCA showing off my break dancing moves, get my butt kicked by a 12-year-old in basketball, fail miserably attempting to perform on the trampoline or even struggle to keep my head above water working out with a college water polo team, I think it’s worth it if the viewers get a kick out of it.” So while Clark’s unique brand of journalism may not draw any comparisons to Cronkite, we don’t remember The Most Trusted Man in America ever tweeting about garlic knots. Clark admits, “I am really not trying to be anyone else other than myself… The best compliment I get from someone when they meet me is ‘you seem real.’”