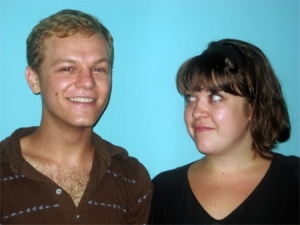 Bushwick is home to many wonderful things — loft spaces, live music, and the L train, to name a few — and now you can add theater to that list, thanks to Meat and Bone Theatre Company, who moved their operation to Bushwick from Williamsburg this past month. The one-year-old company, co-founded by Brooklyn residents Emma Givens and Toby Levin, spent the past year hosting monthly staged readings at Willimsburg’s Stain Bar, until the venue closed this past June.

Givens and Levin, who met while studying theater at Bennington College in Vermont, created Meat and Bone, as Givens describes it, “out of absolute desperation to be part of something we wanted to work on.” Prior to Stain shutting its doors, the two had been eyeing spaces in Bushwick, hoping to move their operation to the neighborhood Givens calls home. Levin says, “We’ve both lived in North Brooklyn for our entire time in New York, and there’s a very vibrant art scene here, but out of all of the kinds of art we see here, theater is definitely the least prevalent.”

The duo, who run rehearsals out of their shared workspace on Troutman Street off of Central Avenue, call their first year “a learning process,” and are beginning their second season with high hopes for their productions. In their 2009-2010 season, the company will be producing full stage versions of some of the plays they previously performed as scripted readings, but have no intentions of completely abandoning the bare-bones approach they used in their earlier shows.

“The reading series is an integral part of what we will always be doing,” Levin says. “It’s very important for playwrights to hear their work before it’s performed as a full play. It’s part of the process and it’s important for people with an appreciation of theater to see how this mysterious process works.”

Meat and Bone kicks off its second season at 8 PM on August 31st at 305 McGuinness Boulevard in Greenpoint. The following shows will be held in Bushwick. For actors, writers, or directors interested in submitting work or auditioning, email meatandbonetheatre@gmail.com or visit them on the web at meatandbone.wordpress.com.