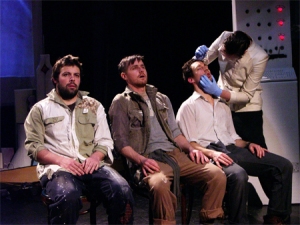 Following the band’s musical introduction, we are introduced to Lucas, played by guitarist Ralli, an affable loser whose interests include drinking, smoking, women, and lengthy discussions with his plants, Stephan and Gary. In the opening scene, Lucas reads a Dear John letter from his girlfriend Sabine, who tells Lucas that he is “like a potato” and explains that she is leaving him for Henry, a man who makes his own perfume. Depressed and drunk, Lucas packs up his things and hits the road with his friend John (Adam Brown), who is on the run from the New Hope City authorities. The two hit the road in search of the Western Belt, where they will be free to drink Fart Beer and listen to the music of Vissermatron 3000, their favorite half-man half-robot pop star.

Ralli and Brown maintain the kind of easy familiarity that is so natural, you almost forget you’re watching actors perform. What the storyline lacks in linearity, the performers more than make up for with their enthusiasm and talent. Although the show maintains the frenetic pace of an impromptu performance piece, the troupe has a keen sense of comedic timing, consistently hitting the right notes to keep the audience both interested and involved.

The play’s greatest strengths lie in the innovative form the storytelling takes. Short sketches involving supporting cast members, including hilarious commercials for Fart Beer, New Hope City’s frat boy drink of choice, and clips from the Sexo the Clown show, segment the narrative without feeling forced. Additionally, the players break the fourth wall a number of times during the performance, incorporating audience members into scenes, creating a unique experience for viewers on any given night.

The show is the product of years of collaboration between the members of Pass Kontrol. Brown and Ralli started the band five years ago, incorporating DeLorenzo and Visser into their act in 2008. The group’s fluid dynamic and acute self-awareness prevent the production from venturing over the edge into kitsch, keeping the show a safe distance from the pretension it so openly mocks. What stands out most about New Hope City is the remarkable musical talent of all of the performers. Visser, who plays half-robot pop star Vissermatron 3000, is a talented singer and musician, whose character’s solo song could easily pass for a current indie rock hit. From dance-offs to fake commercials, New Hope City maintains the delicate balance between fun and folly, creating a mesmerizing and interactive environment for the audience.