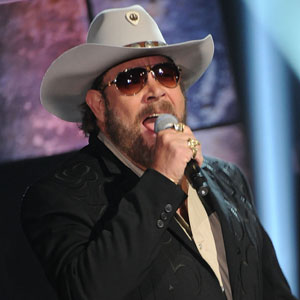 Hank Williams, Jr., whose song  “All My Rowdy Friends Are Coming Over Tonight,” has been played before ESPN’s Monday Night Football games for a decade, found himself at the center of an unexpected controversy last week when, during an appearance on “Fox and Friends,” the country crooner decided to compare our President to the most-loathed dictator in the world. Oops!

After seeing photos of a June golf game between President Obama, Joe Biden, John Boehner and Ohio Governer John Kasich, Williams told Fox hosts that the game was “one of the biggest political mistakes ever.”

“It’d be like Hitler playing golf with Netanyahu,” said Williams. “They’re the enemy, Obama and Biden.”

Unsurprisingly, the comparison didn’t sit particularly well with the President’s supporters – or ESPN, who decided to drop Williams’ song from their football broadcasts after his comments hit the air.

Williams appeared on today’s episode of “The View,” in what many assumed would be an effort to mitigate the damage he’d done, but audiences got something else entirely. The singer showed up in a baseball uniform — perhaps a dig at his former football friends – and stated plainly that his comments about Obama were meant as an analogy and were protected by his freedom of speech.

Joy Behar suggested that his statement may not have caused the same fallout if he had chosen someone other than Hitler to compare the President to, Williams responded, “I’m not smart enough to know the difference.”

It doesn’t seem as though Williams, who called himself and his song “free agents” since their firing, has learned much of a lesson from the whole ordeal.  Describing what he took away from the experience, he used his last seconds on air to give some guff to ESPN’s parent company, Disney. His parting words? “Mickey is a mean mouse.”