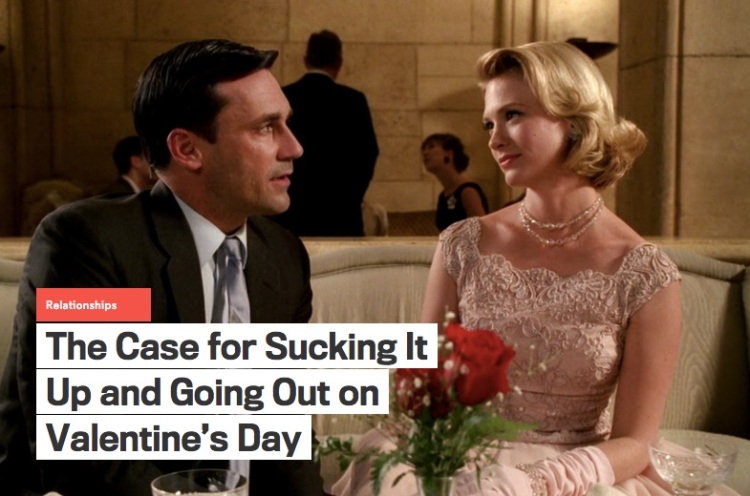 Yeah, we know. V-Day is terrible. But considering what horrible people we are the other 364 days a year, why not use it as an occasion to celebrate the people in our lives who make us, well…better.

If you ask practically anyone under the age of 65 who is not currently employed by a jewelry store in your local mall what they think about Valentine’s Day, you’ll hear the same answer: It sucks, and it sucks a lot. Few things short of a gun to the head or a chance to know just how soft Beyoncé’s skin is would make most people shell out 200 bucks for a multi-course meal of oysters that will slosh around weirdly in your stomach when you perfunctorily poke away later that night.

Yes, Valentine’s Day is mostly good for keeping mistresses quiet and getting to watch with bemused wonder as people eat overpriced slimy foods. It may have even been created by the greeting-card industry to propagate an army of November babies who sincerely believe that we’re obligated to send gifts to the administrative professionals and dental hygienists in our lives. But Valentine’s Day is also, dare I say, special? The shape love takes is never uniform. For some people it’s that feeling you get when you can’t wait to be near someone. For others it’s the biggest diamond you can afford. For most of us it’s simply mustering the restraint not to fart in bed. But Valentine’s Day is one of the few days of the year when we might just do something for a person we love without expecting that we’ll get much in return.

Even if you’ll probably be too sluggish from three $16 Cupidtinis to even get around to that mind-blowing 69 you had planned, you might just find yourself bloated, tired, semi-erect, and smack-dab in the center of an unselfish act for someone who isn’t you.

“The shape love takes is never uniform. For some people it’s that feeling you get when you can’t wait to be near someone. For others it’s the biggest diamond you can afford. For most of us it’s simply mustering the restraint not to fart in bed.”

Valentine’s Day is an occasion to celebrate someone just for being them, flaws and all. Besides, think of all the fond memories you can tell your grandchildren about if you don’t spend this Valentine’s Day at home complaining about the long waits for a table and the markups on champagne. Imagine all the horny college freshmen you’ll see at the restaurant on their first real Valentine’s date. The next time they serve you a burrito at Chipotle or bag your groceries, they might not even be virgins anymore, and YOU got to witness their last glorious evening as a chrysalis before they emerge as gloriously sexed butterflies, their wings glistening with the dew of wet flesh.

My first important grown-up date was on Valentine’s Day. The night before, we’d kissed for the first time in a cab on the way to a birthday party and then again in the alley behind my building while the guy installing my cable pretended not to notice. We went out to an overpriced restaurant and laughed at all the other people nervously sweating through their dates, and I may have put on some Maxwell and suggested we do whatever the equivalent of Netflix and chill was at the time—Blockbuster and sit on my inflatable couch, if memory serves.

We didn’t feel weird talking about how we were kind of into each other, because that’s the whole point of Valentine’s Day; you can put all your heart-and-crotch feelings on the table with relative impunity. We may have thought the whole thing was cheesy, and it was, but we did it because we wanted to be nice to each other, and we were lucky enough to find a whole day on the calendar dedicated to just that. I still have a little stuffed gorilla he bought me.

Reader, I married him.

Writer, natural redhead, semi-professional napper.
View all posts by Sarah Crow »
« Men’s and Women’s Brains Are (Probably) a Lie
How to Be Friends with Your Ex »